Since 2012, my friend and I have been trying to get America to elect Canada president of the United States. Our videos have racked up more than 100 million views, and we’ve published a bestselling book and appeared on dozens of media outlets, including CNN, CBC, BBC, C-SPAN, Andrew Sullivan’s blog, Dan Savage’s blog, the New York Times Magazine, and German State Television for some reason.

Check out some of our work below, and follow us @theCanadaParty. Unless you hate freedom. You don’t hate freedom, do you?

“The Most Underrated Political Strategists of 2012”
– Kathleen Monk, CBC’s the National

“Their bite is on par with that of the Daily Show, Stephen Colbert, and Bill Maher”
– Publishers Weekly 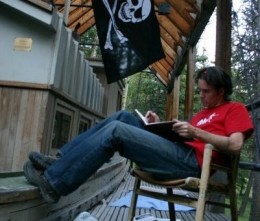 This is me. I'm not really a pirate, but i am a writer, which is like a pirate of the arts. Because writers are poor. And we don't eat a lot of fruit.